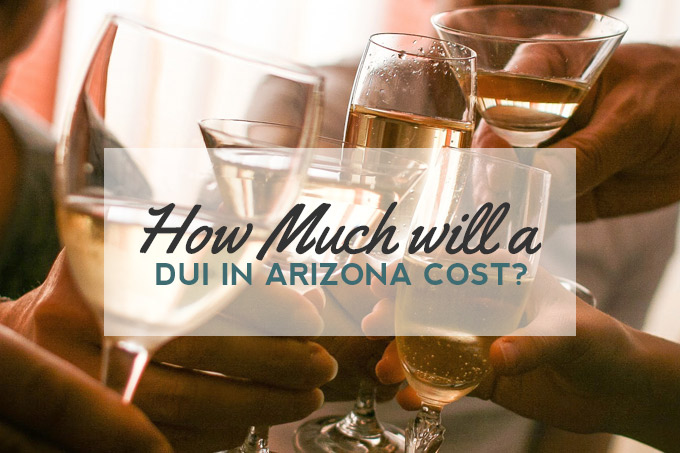 Quick Navigation
How Much Will A DUI in Arizona Cost Me? Cost of Hiring a DUI Lawyer in Arizona How much will a DUI cost me, even if this is my first offense? What happens to my Car Insurance After I get a DUI? What is the best way to find out about the cost of a DUI?

How Much Will A DUI in Arizona Cost Me?

One of the first thoughts to go through your head after you have been arrested for a DUI in
Arizona is, “How much will this DUI cost me?” Almost all the time people totally underestimate the total cost of getting a DUI charge in Arizona. “Why?” Mainly because they leave out some of these important categories, DUI fines, legal fees, insurance costs, rehabilitation costs, DUI classes, license suspension fees, and maybe even the cost of an Ignition Interlock Device and its installation.

All of those things will help determine how much your DUI offense is going to cost, and here we go, are you ready? Typically they add up to thousands of dollars if not tens of thousands of dollars, even after you have paid your Tempe DUI lawyer. If that isn’t bad enough, you have to figure out what might happen at your current job or your future jobs. Will have a DUI on your record put you at a disadvantage, is it going to handcuff you permanently? A DUI arrest charge will be on your permanent record for life, which can show up on a background check. Not Good. So not will the cost of DUI hit your wallet hard, it will cost you a lot in the long run too.

Cost of Hiring a DUI Lawyer in Arizona

One of the first fees a person will pay after a DUI arrest is for a DUI Lawyer in Arizona to help them fight the case in court. Determining how much a DUI lawyer will cost varies, but typically ranges in the amount of $1,500 to $10,000 or more, dependent mostly on how complicated the case might be or if it is a repeat offense. So a DUI arrest from the start is already going to cost you a lot of money, which why you need to hire the best help available. A DUI Lawyer in Arizona can steer you in the right direction and help you avoid the certain costs and fees associated with a DUI offense. Drivers who are convicted of a DUI arrest charge, even for the first time offense, can face an average minimum fine of $1,000 and a driver’s license suspension of 90 days to one year in Arizona.

How much will a DUI cost me, even if this is my first offense?

One of the most recent and expensive fees to keep in mind when figuring how much a DUI will cost, is installing an ignition interlock device on your car, which can cost as much as $2,000, if the judge grants you a temporary restricted license so you can drive. Ignition interlock devices are wired into a vehicle’s ignition system and use technology similar to that used in a Breathalyzer test. A driver must first blow into the device each time before driving, which will prevent the vehicle from starting if alcohol is detected. No fun at all. A lot times you have to pay a monthly fee for the device as long as it is installed in your vehicle too.

What happens to my Car Insurance After I get a DUI?

The answers to the most common questions of how much will a DUI cost me, or what does a DUI cost, is sometimes not that clear, but the cost will be very high if convicted of any DUI arrest offense. However there is no cost higher to people than the human cost of driving under the influence, by being a danger to other people on the road. The high cost of a DUI is simply not worth the risk, and how much a DUI costs for someone recently arrested, will have a lot to do with how quickly they seek the proper DUI legal help in enough time. You can shorten your time today by filling out our FREE DUI Evaluation form.

What is the best way to find out about the cost of a DUI?

The best way to get an estimated cost of how much the DUI will cost or how much will a DUI lawyer in Mesa charge me is to meet with a lawyer face to face or have your arrest details examined for free by us. Whether you do it in person or online through us, it is necessary that your potential DUI lawyer for your case can gets a full picture of your situation and can determine the kinds of defenses they can use.

A DUI attorney in Arizona needs time to review your arrest details and then meet with you in order to give an estimate of what you can expect to pay for your DUI, and decide on the variety of expert witnesses that might be needed to be retained to properly fight your case. After all it is their job to get the best possible results for you so you can win in court and get the charges dropped or dismissed. Don’t Delay fill out our FREE DUI Case Evaluation today